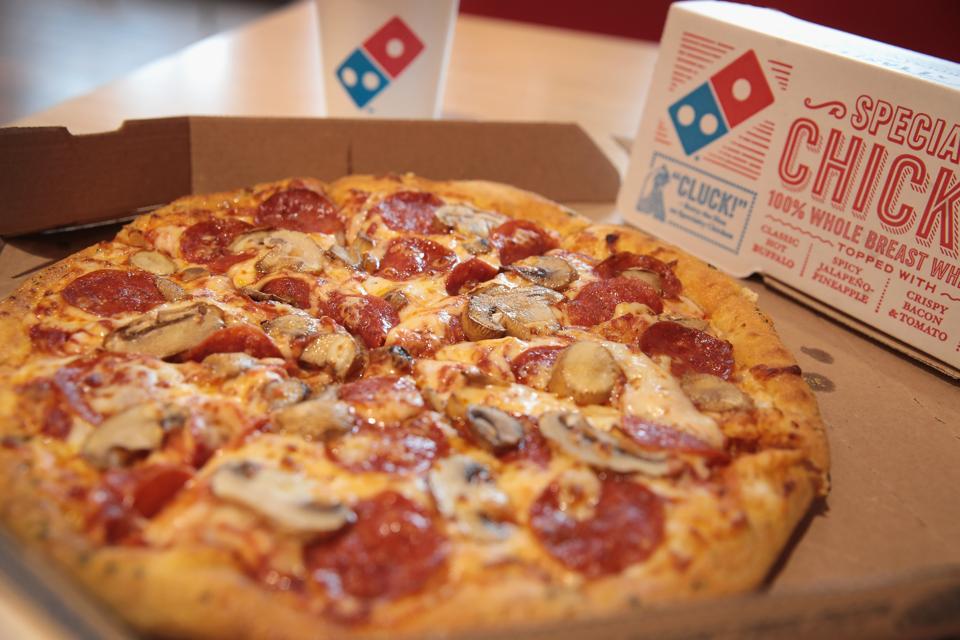 Pizza is one of the most popular foods in America, with over 45 billion dollars in sales annually, and 1 in 8 Americans consuming it on any given day according to the USDA. These stats can make you hungry enough to fuel the question, “who has the best pizza”. Two big names in the pizza industry are Papa John’s and Domino’s. They consistently fight for every inch of market share and are listed as two of the top five performing chains in terms of sales. The debate of who has the best pizza may never end and the answer may never be clear cut – especially since both companies share the same cheese supplier. With this in mind, we are crystal clear when it comes to the question, which company is a better investment opportunity? In our opinion, Domino’s is the clear winner as they possess better fundamentals, faster growth, stronger analysts EPS revisions, better margins and greater profitability. Conversely, Papa John’s has unimpressive earnings growth and this has forced a number of Wall St. analysts to revise their earnings estimates down. Additionally, their margins and profitability are weaker than Dominos.

The foundation of our recommendations is to identify companies that perform best and worst on the collective basis of value, growth, EPS revisions, profitability, and LT momentum. The CressCap systematic trading model gathers data daily on 6,500 companies globally and assigns academic grades (A – F) for each financial metric. These grades are scored relative to its region/sector.

Expand to see how our directional recommendations are computed: CressCap uses a multi-factor model to select the best-performing stocks. Our data is updated daily and the academic grades (A – F) for each financial metric are scored and ranked on a regional/sector relative basis. The foundation of our recommendations is to identify companies that possess the collective investment style of Value, Growth, EPS Revisions, Profitability and LT Momentum. Academic grades of C or better indicate that each metric scores well compared to the peer sector

Domino’s reigning superior was not always the case. They have come a long way since 2008, when their growth rate was slowing and its share price hit rock bottom at $3.03 in November of the same year. The reviews of their pizza ranged from, having “cardboard crust” to being “the worst excuse for pizza”, along with many saying they would prefer microwave pizza to the chain’s. In 2010, the company, lead by CEO J. Patrick Doyle, had enough and approached their struggles from the ground up. In 2011, the company had changed their 49-year-old pizza recipe, along with overhauling 85% of its menu in order to improve their brand and to diversify themselves from their competitors. In 2011, the pizza powerhouse added a considerable number of new items to their menu including stuffed cheesy bread, penne pasta, chicken options and more dessert choices. In addition to the menu improvements, the company has emphasized that they attribute much of their success to creating mobile apps on all platforms along with a responsive website, which streamlines the process for customers to order their product. Domino’s Robotic Unit, an autonomous delivery vehicle, has taken tech lovers by storm, enhancing the future commercialization of this technology. Domino’s has even taken their community outreach one step further by launching its “Paving for Pizza” initiative. In this initiative Domino’s provide grants to US towns to help fill potholes, that could cause damage to the pizza on its way to its destination. Domino’s is experiencing a change in their front office, with the well respected J. Patrick Doyle stepping down as CEO. On July, 1, 2018, Richard Allison, currently President of Domino’s International, will assume the role of Chief Executive Officer. Doyle has faith in Allison and said this about his departure: “I wanted to have a Leadership Team in place that would be ready to create even better results into the future. I’m proud to say that we’ve accomplished all of those goals, and I will leave Domino’s knowing that it is in great hands”.

On April 26, the Michigan based Pizza chain released their first quarter 2018 financial results where they saw global retail sales grow 16.8% and domestic same store sales grow 8.3%. CressCap gives Dominos a grade of A-. The growth track record of the company is outperforming its consumer discretionary competitors with 68.01% compared to the sector average of 9.34%. The first quarter of 2018 proved be a tremendous success for Domino’s with revenues increasing $161.2 million, or 25.8% and net income increasing $26.4 million, or 42.2%. Domino’s attributes the boom in revenues to higher supply chain volumes resulting from order and store count growth. Further, they claim their net income increase can be attributed global royalty revenues, higher supply chain volumes, and a higher deduction related to excess tax benefits from equity-based compensation. This stock has impressed CressCap, that has a buy recommendation on the stock, a conclusion that is backed by both technical and fundamental opinions.

With Domino’s performance soaring, their competitors such as Papa Johns are struggling to keep pace. In their first quarterly report of 2018, the “better ingredients, better pizza” chain had far different results from Domino’s. They acknowledged a domestic sales decrease of 5.3%, and disclosed that consolidated revenues had also decreased by 4.9% to $21.9 million. They attribute this poor performance to lower comparable sales for North American restaurants and lower North American commissary sales due to lower volumes. Steve Ritchie, President and CEO of Papa John’s, tried to reassure investors by stating, “Although first quarter results were lower than the prior year, they were consistent with our expectations. We remain focused on enhancing our value perception and driving our strategic initiatives”.

Rather than following Domino’s lead and diversifying the menu, Steve Ritchie, the then COO, stated in 2015 that, “pizza is our focus”. He emphasized that the public should, “not expect to see us introduce an extensive development of sandwiches, side items, that would create complexity within the operations model”. With their model underperforming the market, the question remains, have they made the right managerial decisions? The company has done little to stay out of headlines with the, now former, CEO John Schnatter blaming the decline in NFL viewership and players kneeling during the national anthem as reasons behind the dwindling sales growth of Papa John’s pizza during the 2017 season. Following this statement made by Schnatter, Papa John’s is no longer the official pizza of the NFL in 2018, a title it had held since 2010. This is further adding fuel to the fire of the pizza chain struggling to gain a bigger market share in the consumer discretionary sector.

CressCap grades Papa John’s an F, based on poor financial metrics. The CressCap sector rank is 310 out of 315 companies. The 2 Yr. Forward Sales Growth Rate (%) for this stock is negative compared to the sector with a growth rate of 11.47% and analysts EPS revisions for the stock have trended down 18.5% in the past 90 days.

The debate of who has the best pizza may never end, but when it comes to wallet appetite, we have come to the conclusion that the heavy favorite is Domino’s. In every metric CressCap scores, Dominos outranks Papa John’s by wide margins.