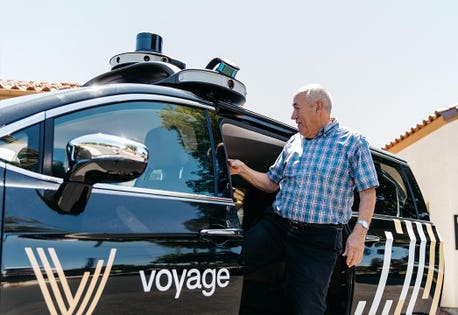 Among the big auto Goliaths and their swollen check-writing wrists, there’s a little startup armed with a slingshot and bragging rights. That startup is Voyage, and it has some lessons to teach the mobility sector.

The team who spun out of Udacity’s self-driving car nanodegree program has raised just over $20M to date, per CEO Oliver Cameron. For reference, that’s two orders of magnitude smaller than the last investment round announced by GM’s Cruise. And unlike Cruise, Voyage has customers today.

In a way, the self-driving taxi service Voyage provides for two large retirement communities (The Villages San Jose, and The Villages Florida currently being deployed) is logistically a standard taxi service, as safety drivers are always present to monitor or correct the vehicle. But in another, more accurate way, that’s the logistical setup of everyone in this space apart from Waymo. For the time being, all autonomous car projects are just here to get their education.

To that end, Voyage is acing at least one vital subject: public perception. In classic lean startup style, they’ve identified an early adopter market — one where mistakes are manageable and downtime is forgivable. It may sound like the makings of an inconsequential experiment, but Voyage’s San Jose location is 4,000 residents strong, while the Florida location boasts a city-rivaling 125,000. In both communities, the taxi service is offered as a value-add to the already pampered lifestyle.

Overview of The Villages Florida community

It’s an unfamiliar position to carmakers, who are accustomed to slaving away at products before formally presenting them to the world like mechanical debutantes. It’s also increasingly unfamiliar to the tech giants who see their platforms as the product, and wouldn’t think of launching a solution without key integration points capturing all the consumer data they can stomach.

But the race for self-driving cars, if that’s even a thing, is really more of a land grab. There’s no objective bar for the maturity of the tech; if you can align the capability with the need, you can find pockets of opportunity… and maybe, expand those pockets into a well-carved niche where competitors are unwilling to tread.