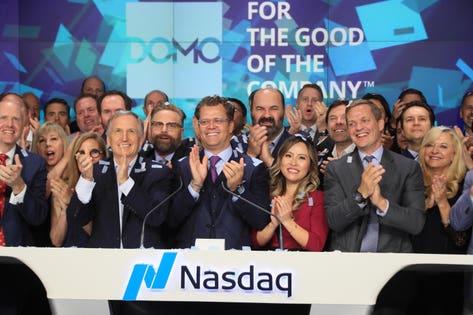 Domo CEO Josh James rings the bell at Nasdaq as the company goes public on June 29, 2018.

“Hold on, Michael Dell’s texting me congrats on the IPO.”

It’s Friday afternoon, and CEO Josh James is on the phone after taking his Utah-based software company, Domo, public. Shares in the business intelligence company have gained about 30% in first-day trading. Whether Domo’s IPO has been a success for the company, and a tech sector at large looking to join a wave of recent public exits, depends on whom you ask.

Three years ago, Domo was valued at $2 billion and James hinting at IPO. A year ago, Domo raised $100 million more – giving it a total investment raised of nearly $700 million – from private investors that valued the company at about $2.3 billion, reaffirming the company’s place as one of three high-flying unicorns leading a cloud computing boom in Utah’s Silicon Slopes. James, who’d previously taken Omniture public and sold it Adobe for $1.8 billion, was the brashest, hardest charging – and highest spending of the bunch. But when Domo released its financials in an S-1 filing in early June, reception wasn’t pretty. “Be wary,” one analyst wrote. “I’d say the Domo Emperor’s donning a Speedo,” another industry tracker said.

In that context, Domo’s first-day pop comes with more scrutiny than the typical first-day tech pop. But in an interview with Forbes, James – still name-dropping, still freely speaking his mind – said the IPO was the most efficient step forward for his company, which he argues has found its path forward. As for the doubts and downsized valuation? The “potshots,” James says, have been “galvanizing” for employees.

“Today’s been great, but it’s a financing event, a milestone. We needed to raise some capital and this seemed the most efficient way to do it. And we’re excited,” says James. “We’re hitting all the right metrics in terms of finally proving the enterprise. Now we have to go and execute.”

Why Domo went public now is simple, according to James: The company needed more cash to invest in the business and didn’t love the alternative of raising another private round that could come with potentially onerous terms. “I’ve lived through two bad times,” he says, referring to the bursting of the dotcom bubble and the financial crisis of 2008. “You don’t want to get stuck on a bridge to nowhere, or in the middle of the desert, when something like that happens.”

Domo offers a dashboard of a business’ key financial metrics, like others in the business intelligence space, working with 1,500 businesses as of its April 20 filing. Where Domo has historically said it’s different is that many of its users are CEOs – James said on Friday about 400 – and that nearly that many customers have revenue of more than $1 billion. Domo has also billed itself as the most mobile friendly, pulling in data from a range of sources to display information like inventory, sales and team targets on easily swiped digital cards.

For James, who told Forbes last year that Domo would take a billion dollars to perfect, the math still adds up to a big opportunity. “We’ve repeatedly said that if we raised $200 million, we’d have enough to get us to cashflow break even,” he says. Domo has high sales and marketing spend, as well as a large research and development budget, that James spins as a positive because of the cushion they offer to move faster to that goal if needed. But James says Domo isn’t about to stop its high profile events like customer conference Domopalooza, which has tapped celebrities from Alec Baldwin to Nelly and Kesha. In 2016, James paid for Flo Rida and Snoop Dogg to perform across the street from rival Tableau’s customer event.

“I think most people usually get it wrong with what they think things cost or what makes money. Our conferences have done really well for us, and we see a vast majority of revenue present at them,” says James. Asked about his flair for the dramatic in marketing his business, James replies: “Will we see more flair in the future? Hell yea, we will see more flair.”

As for the skepticism around his public offering, James sounds in turn frustrated and defiant, with a dose of humility mixed in. James admits that he would’ve expected Domo to go public a year or two sooner, but that the company made mistakes in its original go-to market strategy before focusing more on its corporate and big-customer business. That in turn reduced a high turnover rate among smaller customers that afflicted Domo in early years. He acknowledges that Domo’s haircut in valuation raises red flags. “Would I have liked to have a big up round? Yea, of course I would. But this is just a financing,” he says, adding that he bought stock and one of the company’s late-stage private investors did the same.

Internally at Domo, James says he’s been meeting with groups of its 800-or-so employees to explain that the IPO is a financing that leaves the company still with everything to prove. “To employees, this has more than anything been pretty galvanizing,” he says. But James also comes off frustrated by the questions afflicting Domo after years of mostly positive unicorn coverage (including in Forbes). “I love when people doubt me, it’s good motivation,” he says, before in the next breath questioning why VCs and others break down S-1 filings about businesses they aren’t involved with in, when companies can’t respond due to SEC rules. “That’s laughable to me really,” he says.

“People have taken pot shots, people have questioned our product. When you’re innovating and doing something that no one’s done before, you are going to have a lot of doubters,” James says. “That’s why no one has done it.”

If there’s a lesson in Domo’s financial position and the circumstances of its IPO, James says it’s to know how big a product one is trying to build. “It’s one thing to make a prototype. And then another to say, oh my gosh we actually have to make seven startups to build this so it works. And then welp, that will require a lot of money,” he says.

Ultimately, Domo’s ability to back up its enterprise-friendly story will likely prove the decider in whether Domo’s IPO looks more like a derailment or a blip. If Domo keeps signing on multi-national type companies and retaining them, Wall Street will see it in the numbers. If Domo can’t, it will have nowhere to hide.

“What matters is our ability to serve customers,” says James. “And I believe the answer is yes, we can repeat that value over and over again.”