Just about every day, AT&T (T) reminds investors of how bad the company wasted shareholder money with mega acquisitions. The latest news regarding the DirecTV Now service is again a reminder that the company needs to focus on repaying debt far beyond the stated objectives as any other management moves will hurt the stock. AT&T is stuck at $30 for the time being, at least offering shareholders at 6.7% dividend yield to offset the suffering.

A prime reason for purchasing DirecTV was the ability to offer a competitive streaming service. After the purchase, AT&T launched DirecTV Now to some initial success, but the company is now crushing a major reason for paying $48.5 billion in the mega merger.

AT&T announced plans to raise the lowest price for DirecTV Now to $50 while stripping out cable channels from Viacom (VIAB) and AMC Networks (AMCX) in order to make the service profitable. The whole problem with the OTT concept from AT&T was the service too resembled traditional media services with a large bundle of channels.

The company now offers two bundles at $50 and $70 with HBO included in basic packages that cost $10 more despite dozens of channels stripped out of the mix. According to the Verge, AT&T now has the highest base plan cost of the five major streaming services that’s now led by Sling TV (DISH) and Hulu with Live TV owned via a future majority by Disney (DIS).

The problem is that AT&T’s management again claimed to understand the business back in December to only clearly show that they had no clue when purchasing DirecTV in the first place. CEO Randall Stephenson had this to say at the UBS Global Media conference:

We’re talking $50 to $60. We’ve learned this product, we think we know this market really, really well. We built a 2 million subscriber base. But we were asking this DirecTV Now product to do too much work. So we’re thinning out the content and getting the price point right; getting it to where it’s profitable.

The end result is a service already cutting customers after just reaching the 2 million subscriber base. DirecTV Now lost 267,000 customers during Q4 when Hulu replaced the service at the 2 million customer base. In addition, AT&T lost 403,000 satellite customers, suggesting the company is quickly unraveling a lead in pay-TV services. The only good news is that the move shifts the focus to making the business profitable and profits lead to keeping the large dividend.

The wireless and entertainment company finds itself in the middle of a video streaming war where the purchase of Time Warner (NYSE:TWX) actually pits itself against DirecTV. Offering the DirecTV Now bundles at a loss just left AT&T supporting content providers to compete against Time Warner properties. The company is now quickly headed toward mostly WarnerMedia products with the following video streaming services.

The planned entrance of Apple (AAPL) into the streaming wars on March 25 further adds to the upheaval in the sector. The tech giant has reportedly had a $1 billion budget for content and could give the service away for free in order to attract subscribers for other video subscription services such as HBO where Apple takes a cut.

Hulu runs a money-losing operation that can afford to wait out the competition. One should expect DirecTV Now to lose a substantial portion of their subscribers while traditional pay-TV services remain in a substantial downtrend.

Luckily, the entertainment business is the smallest profit generator of the new AT&T. The division only had $2.2 billion in Q4 EBITDA and operating income of $826 million. Cutting back on DirecTV Now should help stabilize the profit levels of the entertainment group. 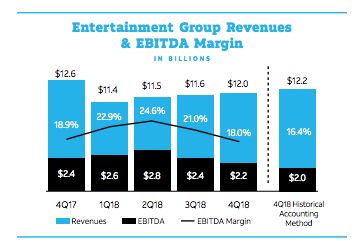 The biggest risk to the bullish investment thesis is the media business from the new WarnerMedia. Most of the content providers have a strong profit incentive, but a lot of the new content services from tech players like Apple are as interested in subscribers than initial profits. The media division had Q4 operating income of $2.6 billion that is now at risk from a competitive environment. 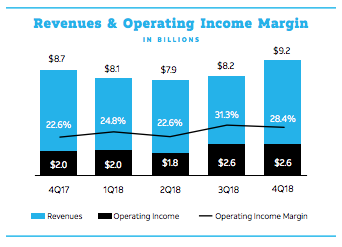 Hanging Onto The Dividend

CFO John Stephens didn’t exactly provide welcoming comments at the recent Deutsche Bank Media conference. The financial executive sees headwinds during Q1 from wireless equipment revenues to the tune of $100 million and at least another $200 million from the amortization of wireless commissions.

The biggest problem is that the CFO doesn’t even address the DirecTV hit from the pricing increase. The company will lose customers, though again this may not hit EPS with the DirecTV Now service running at an apparent loss.

Not addressing this issue further strengthens my resolve that the AT&T executive management team isn’t leading the market, but rather following directions made by other industry players, whether in wireless, entertainment or media. The mega-mergers of DirecTV and Time Warner are both proving to be examples of management skating to where the entertainment and media sector was at and not heading toward where the market is going. The company isn’t leading the market which is a traditional weakness of a conglomerate that’s far too slow to act.

For this reason and until AT&T gets new executive leadership, the company needs to be on a strict debt repayment diet. No more transformational acquisitions where past industry leaders are bought at a premium.

My previous thoughts on the stock rallying to $40 are starting to fade. The wireless giant isn’t generating the EPS growth envisioned with the acquisition of Time Warner or even approaching the hopes of reaching a $4 EPS target. Analysts see the company earning a max of $3.65 per share in 2020.

For this reason, AT&T is likely headed to minimal capital gains due to a lack of confidence in the management team surrounding the risks to these estimates due to the competitive entertainment and media sectors. The best hope is collecting the 6.7% annual dividend with a forecasted mid-50% payout ratio. The company hit a payout ratio of 60% last year.

The key investor takeaway is that the market already has lost complete faith in the wireless giant. Despite buying both DirecTV and Time Warner, AT&T already is a major laggard in the video streaming space. The only hope while this executive team is in charge is cutting costs, reducing debt and paying the large dividend yield.

Disclosure: I am/we are long T, AAPL. I wrote this article myself, and it expresses my own opinions. I am not receiving compensation for it (other than from Seeking Alpha). I have no business relationship with any company whose stock is mentioned in this article.

Additional disclosure: Disclaimer: The information contained herein is for informational purposes only. Nothing in this article should be taken as a solicitation to purchase or sell securities. Before buying or selling any stock you should do your own research and reach your own conclusion or consult a financial advisor. Investing includes risks, including loss of principal.